Second race completed wow! I arrived early once again, it is what I do. So I had the opportunity to explore how things worked and see what the expo was about. I was reassured and inspired as there were people of every type there who were doing the whole thing. You never know one day I might complete it too. I did not eat before leaving home, stupid I know, I was very nervous, don't think I would have kept it down so I grabbed a coffee and a flap jack whist I waited for the rest of my team to arrive. 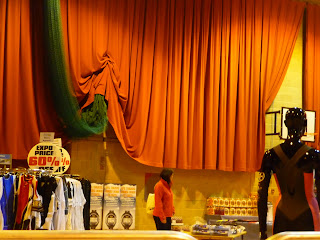 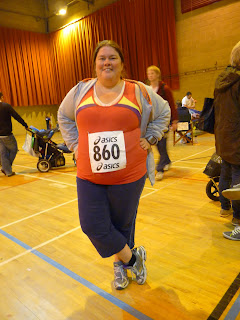 Once they did we all registered together and got our numbers marked on our right arm left leg, it is still there. Then it was awaiting game again. We watched the transition area and cheered. Specially the two members of our team that were completing the whole race. Wow amazing. Soon it was Joe's turn to swim and she managed 400m in 10 min then came running out to the transition were Gill and me were waiting. Gill set off once the arm bands were exchanged. We were worried about her as she had fallen from her bike a couple days earlier and injured her shoulder. 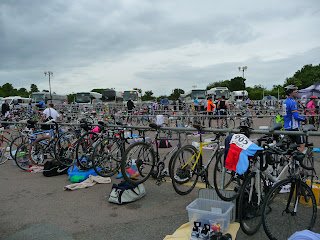 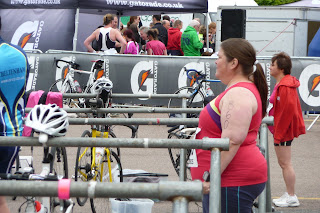 Gill was however determined to do it just slower than she first hoped. She was back in the transition area about a  hour later just as our other team mate were finishing. I was watching them and almost missed Gills return but now it was my turn arm band exchanged and I was off. Along a grassy track the ground was very in even unlike the canal I had been training on but I soon got in to it. I had decided to keep to under 15min miles and tried to monitor myself however I found I was going at 13min miles. I was still being over taken but was not worried about it. 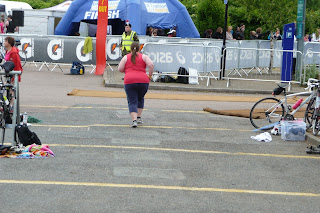 It was a two lap course and at half way all my team mates and family were there cheering me on so I had a little boost then. Second time round though I found my self walking my legs just would not move now it was the runners passing me that egged me on saying "go on you can do it" and "dig deep." At one point  I found I was running again with Blues Euro-vision song going though my head. Headphone were not allowed. I was singing "I can, I will" over and over and I kept on going. Suddenly the finish was in sight and I crossed to cheers. I got a PB of 46 min. 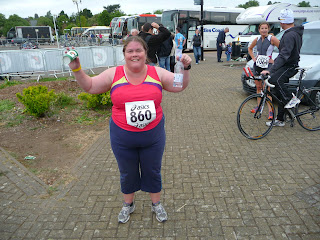 Bring on the next race
Posted by Audrey at 09:29