This week has be a good one. I am running again, using different plan as I had to readjust again to meet my 5k target before the race in March. I found one in a magazine which will get me running 5k on race day, so I am happy. It is a bit strange as each day is different. It stared with 2k run then 2min walk and repeat, the next run was 15min run 5min walk 5min run. Then my next run will repeat the first day. It feels easy at the moment having run for 30 min continuously on The C25K program. It does feel nice to mix it up a bit.

My heel feels a lot better, it still niggles so I am wary but don't want to give up what has taken so much effort to achieve. I owe some of my recovery to a interesting device called a Nova-sonic,see picture, basically it vibrates and sends sonic waves into the injured area. Now I don't know if my heel would be ok now with out it but the pain was significantly less following the first 10 minute treatment. So I  will be investing in one for myself to use in the future. It worked well on my tight  shoulders too. 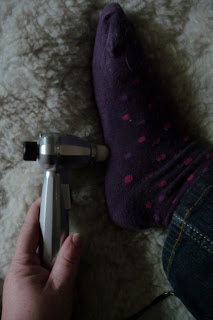 I have also discovered, rather happily, that missing one run does not mean a step back, my first run back was just as easy as it was before.In fact  I ran further before I felt tired, even on a different plan. So maybe the two weeks off running they talk about before you lose fitness is true. Not sure I want to test that I think two weeks off running would be more difficult to psychologically get back from. Maybe though I am too new to this to make a judgement. I have learnt though it is not to detrimental to miss one run if you have to. That said though I am sure making a habit if it will make a difference.
Posted by Audrey at 13:24 1 comment:

Whist out on my 2mile run yesterday my heel stared to hurt. Ok I will back track, following my 2mile run on the 7/2 whist walking later in  the day my heel started to hurt. I iced it , rested and thought it was OK so run yesterday, when it flared up during my run. I only managed 1 mile and had to walk home. I have rested, iced and stopped walking bare foot around the house. I hate shoes indoors having grown up  barefooted  in Africa . It still hurts so  tomorrow I will treat as another rest day ,skipping the run giving it more of a chance to heal. I feel very frustrated now just as I was starting to enjoy this running thing, I am not giving up though so that is a definite change.
Posted by Audrey at 14:03 No comments:

As I have already said I have now completed the c25k program. I have actually finished something I started and feel quite proud of my self. When I first started running the program the 1 minute was so hard and the time each week seem to double. Week 5 was interesting, with the transition to a full 20 minutes running, my legs were like jelly. I could not believe I had done it in the snow too.

I was even ill and did not go out for over a week yet I came back on the program and carried on. Now I can keep going for 30min, 1 minute is not difficult now. All in 9 weeks (OK 10 with the week off). OK so I am only running 2miles not the 3.1 (5k) but I will get there.

To get there I have decided to go back using distance this time, about week 5 and progress from there, which means basically I increasing the distance I run by 0.25 each week so by race day I will have completed the 3.1 miles. I will however run continently for the 2 miles not the intervals on week 5 & 6.

I am staring to enjoy running now it still hurts at times but I feel so much better the rest of the time that it does not seem so bad. May be I can run a Marathon in a couple of years.
Posted by Audrey at 18:25 No comments:

Well I have completed the c25k and will cover my thoughts in a later post, I want to talk about today's run first.

I went for what was supposed to be a 2 miles run today after work. What a disaster it felt like I was starting out from the beginning again I could not even mange 0.5 mile. My knees hurt I felt sick awful. Thinking about it now though it was my first time going out after work, I like to get it over with in the morning, so have the eating thing sorted. At lunch today I sat down for my meal and was half way though when I remembered about the up and coming ran so as a consequence I was still a little full when I went out. I was also tired from work.

I choose to go after work to make my run schedule a bit more even, else at some point this week I would have three days between runs. I don't like the  idea of have a that longer gap between my runs. I also start work at 0730 , getting up at 0530 to run is not appealing to me right now, I like my sleep and am not a very good morning person.  So given all that after work seemed a good idea. I am proud that I went out and did it, next time I will not have such high expectations of a post work run.
Posted by Audrey at 17:34 1 comment: