Started the new schedule this week to improve my speed. It has started me off easy with slow runs (Easy run) of various times. I decided to start using the heart rate monitor, for my Garmin, so that I can stay at the correct pace however I was reaching the target for a easy run whilst walking. Not good, so I have adjusted the limits a bit. I still can manage to hold a conversation so I feel OK about it. Today was a total of 50 minutes and once completed I felt I could have gone on a lot further.

It has been beautiful out there this week the sun is out and it is unseasonably warm. The blackthorn is in bloom and the ducks are much more settled in there pairs, ducklings will be showing themselves soon. With it warming up I must remember to take water with me don't know how I am going to carry it with a dog lead as-well, it is getting interesting. Next week I start speed work AHH!
Posted by Audrey at 17:08 No comments:

I have done it amazingly! I turned up early, just in case I got lost along the way, I did make one wrong turn but was fine. However just as we were getting out of the car there was a car accident just outside the venue, no-one was hurt thank goodness. I was glad I was not involved and it did delay people arriving after us. So I had plenty of time to get my tee-shirt, they had loads in my size still , pin on my number,  watch fallow runners arrive whilst having a drink to keep hydrated. 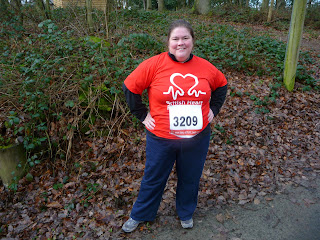 All this time though meant I also had time to get very nervous cant believe how much, it  was worse than going on stage and dancing. I had to go to the toilet several times before the start. 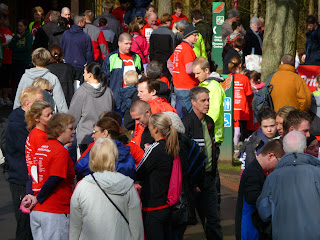 There were about 600 runners according to the comentater even dogs, I missed Sasha at this point, I wonder how she would have got on with the crowd. 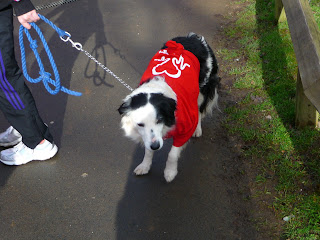 There was a Zumba warm up which I choose not to do, I did not want to be to knacked before the start 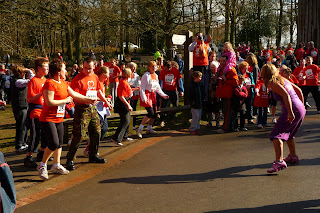 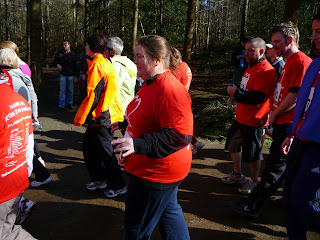 The beginning was down hill. I was glad I heeded advice and started near the back so as not to go off too fast but I did spend the first few minutes weaving my way though walkers. Passing people was very reassuring as  I was not going to be last, mind I was also over taken by a man with his daughter on his shoulders, mad passed though my mind

The first mile was taken up with the weaving game, then we hit the mud on a narrow path. I was glad I had the right shoes so was not worried about slipping so could carry on running. I played this game with one family , yes family, taking it in turns in the lead I passed on the muddy bit, they passed me on the dryish parts.

The final mile was one long steep hill. At the start of it I walked and thought it would go down just passed the bend but it just carried on up and up. I had to stop once to get my breath.  About 200yards from the finish it finally leaved out .When I saw my family cheering me on I almost cried and I managed to run over the finish line 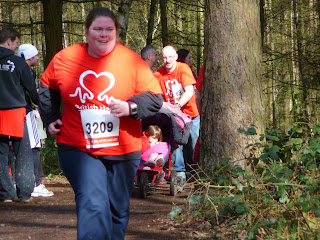 in 55.46, I know I have gone faster in training but that hill was amazing and I walked quite fast up it only stopping once. So I am very proud of my self can't wait to do it again. 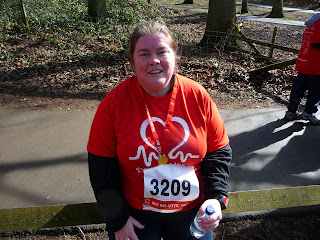 I have enjoyed beautiful runs this week, this could be as I  have achieved the 3mile goal, also the weather has been lovely. Today the sun was out for what seemed like the first time in ages. I got quite hot and thought I should have worn a tee-shirt. Between seasons it is hard to decide what to where normally let alone when you are running in it and getting warm. I am not the only one with this dilemma every runner I see has a different option, on from tee-shirt to jacket.

Funny this is my concern not finishing the miles, I am so proud of this achievement. Race day is on Sunday and I have run the distance twice, slowly but done it. I have been told I will run faster in a race not sure how that happens how will I know I can maintain it for the distance. I have already decided to walk any steep hills, as all my training has been on the flat and hills scare me. Now I know I can run the distance it feels OK if I have to do that. So if I end up waking some of it how can it be faster. Suppose I will find out on Sunday.
Posted by Audrey at 18:21 No comments:

I have have had a fanatic week running. I can really feel it getting easier today especially, completed 2.5 miles and by the end of this week I will have done the 3miles, a whole week before my race. Getting excited and nervous all at the same time, am also being very protective of my self and resting as feel like I and on the edge of a cold, the last thing I need now. 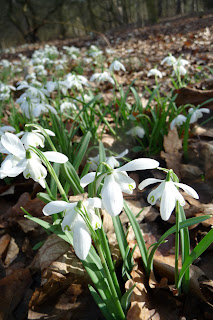 Spring just seems to have come out of nowhere suddenly there are cocues and birds in pairs everywhere, not sure how the transsition between the seasons happened , I swear last week it was in hiding, only the brave snow drops were showing there heads.  Cant wait to see the ducklings and signets on my route even more motivation to keep me on track. Will need to fish out my tee shirts soon.
Posted by Audrey at 19:07 No comments: