The Christmas tree has been put away and I have space at the computer again. What a couple of weeks I have had. Before Christmas I managed to complete week 5, 20 mins in the snow, 3 times around the field. I remembered when 1/2 a side felt hard I would  imagine running all the way around it and looking back at the beginning. Then I thought it would take me a lot longer to get here but here I was only a few weeks later  I was so proud of my self.  I did how ever feel completely dead at the end of the 20 mins  with a blister on my foot, still happy and ready to move on to the next week though. 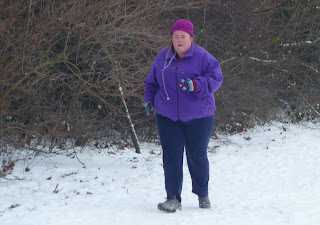 Of which I did day one quite happily then the flu hit, on boxing day could not move. I attempted to run again on new years eve starting week 5 again but only managed  half. I felt so disappointed but I could not breath and felt so sick the only answer was to drag my self home. Thought I would try again two days later and here I am just finished day three week 5 again,  it was so much easer this time, no blisters or wobbly legs.

I felt the need of a change so I run a different route.  It does mean I need to stop and  cross the road which is a bit annoying that but cant be helped I suppose. It did feel good running on a different path with Sasha.
Posted by Audrey at 16:34